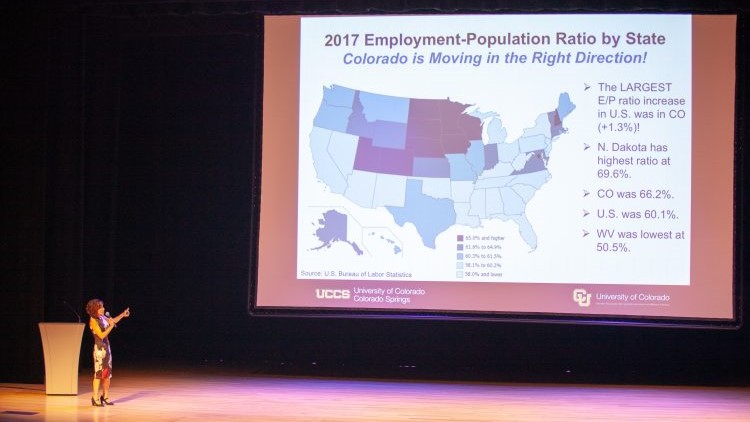 The strength of the local Colorado Springs economy and the diversified growth of the state economy were among the top highlights from the 22nd UCCS Economic Forum.

The strength of the local Colorado Springs economy and the diversified growth of the state economy were among the top highlights from the 22nd UCCS Economic Forum Oct. 4 at the Ent Center for the Arts.

Tatiana Bailey, director, UCCS Economic Forum, forecasted that the gross metropolitan product will continue to grow faster than the national rate by approximately one percent at 3.7 percent in 2018 and 3.5 percent in 2019. Colorado Springs ranked in the top 25 percent for GMP growth last year and local consumer sentiment is nine percent higher than the national rate.

The number of jobs in Colorado Springs increased 3.9 percent in the last year with the largest growth in health care, professional and technical assistance, construction and hospitality. The number of jobs has kept pace with the population growth of El Paso County, and the county population is projected to surpass Denver County by 2020.

“We are transforming into more of a high-tech, high-skill economy,” Bailey said about Colorado Springs. The median salary for posted jobs is more than $4,000 higher than the state. Private wages continue to lag behind the state and national averages for a host of historic reasons. “That will need to change moving forward if we are going to attract the brightest, most qualified workers.”

Colorado Springs is the fastest-growing city for millennials based on tracking by the Brookings Institution and had the additional benefit of being one of the most educated regions in the country. Affordability for young people in particular, is a challenge as local home prices have increased almost 14 percent in the past year while national rates have increased about 5 percent. Commercial real estate prices have not increased as much and they are 40 to 50 percent lower in most categories compared to Denver. Another asset is that the Colorado Springs Airport enplanements are up 14 percent in the past year. Tax revenue from tourism reached nearly $100 million in 2017, which should only increase with the new city attractions coming online in the next 1-2 years.

Statewide, the gross state product increases mirrors the local growth, and Colorado represented the second-largest growth in the country in 2017. Twelve employment sectors saw growth between 2 and 8.5 percent with more than 56,000 new jobs in 2017.