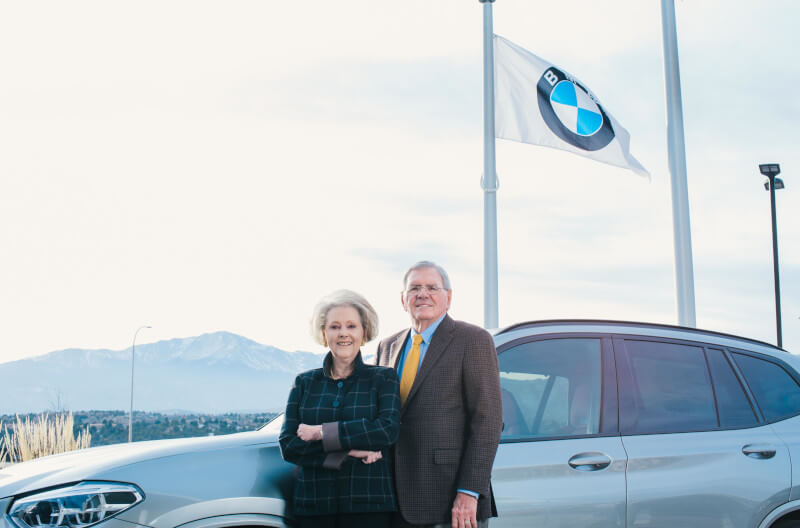 The College of Business will honor business leaders and community philanthropists Phil and Ann Winslow on July 21, 2021 at the Lifetime Entrepreneurship Award Luncheon. The award ceremony, originally scheduled to be a virtual event, will take place in-person at the Ent Center for the Arts.

“Phil and Ann Winslow have made great contributions to the Pikes Peak Region through business and community leadership,” said Chancellor Venkat Reddy. “UCCS is proud to honor their nearly sixty-year entrepreneurial legacy and we will do so when it is safe for our honorees, attendees and students to be back on campus.”

BMW is an international brand, but to Colorado Springs’ residents, Winslow BMW is a family-owned business that is characterized by loyalty, quality and customer focus. The Winslow’s have been integral to the automobile industry in Colorado Springs since 1961 and they continue to influence and impact the local community, both personally and professionally.

At just 24 years old, Phil became the youngest Volkswagen dealer in the country. When his father passed away in 1964, Phil was appointed to be dealer successor and took ownership of formally-named Phil Winslow Motors, Inc. He purchased the BMW dealership in 1983 and has since driven decades of continuous growth and success for Winslow BMW of Colorado Springs, while still maintaining its family-run charm.

Phil’s impact stretches far beyond the borders of Colorado Springs. He has held various roles in local, state, and national organizations, including industry-focused positions as Chair of the Colorado Automobile Dealers Association Board of Directors and Vice Chair of the Volkswagen of America National Dealer Advisory Council. With an affection for education, Phil was appointed by both Republican and Democratic governors of Colorado to serve 10 years as a Trustee of the State Colleges of Colorado and has served UCCS and the local school systems in various capacities.

Ann’s passion for cars was apparent from an early age. Growing up as an only child in Baytown, Texas, she developed an affection for cars and football from her father. In 1991, Ann became the executive director of the Colorado Springs Automobile Dealers Association and in 1995, she also accepted the role of executive director of the Colorado Springs Executives Association. Her exceptional leadership skills and business ambition served both organizations for over a decade and she later joined her husband as vice president of corporate communications at Winslow BMW of Colorado Springs. Ann has been essential to the success of BMW over the years. She blends an undeniable love for cars with an unwavering work ethic, helping to define Winslow BMW of Colorado Springs as one of the top customer service providers and community-oriented organizations in the region.

The 2021 award luncheon is a fundraising event to support the UCCS College of Business Alumni Association and the newly launched College of Business R.O.A.R. Program, which connects alumni, employers and community professionals to students through career exploration, internship and mentorship. The luncheon begins at 4:00 p.m. July 21 at the Ent Center for the Arts on the UCCS campus. For more information on the 2021 awardees, go to uccs.edu/LEA.

The College of Business is currently seeking sponsors for the 2021 Lifetime Entrepreneurship Award Luncheon. To learn more about sponsorship opportunities, contact Katie Burns at kburns@uccs.edu or call (719) 255-5174.